I have read a fair amount of fictionalized accounts of the war in Syria, the journey of refugees, and their resettling in various countries, but this was the first graphic novel on the subject that I have seen, and I was excited to wait my turn behind my kids to read it.  My 7th and 4th graders read it in about 20 minutes and said they really liked it, knowing that it was a quick read, I wanted to take it in slowly and examine each picture to grasp the full message that the author, a Lebanese journalist, was conveying.  Definitely meant, for ages 5th grade and up because of the content, I appreciated the book more than I loved it.  It seemed rather choppy and the fictionalized parts come across just as a front to convey facts.  The book definitely is a great introduction to the conflict, and the format will appeal to a broad range of individuals.

Told from the voice of Amina, a bright young girl who rushes home to show off her latest A grade paper to her family, is met instead by a bomb striking the beautiful peaceful neighborhood.  The images on the first page are destroyed as her younger brother Youssef must be located in the rubble and debris.  Now in Canada, Amina tells the story of their journey from Aleppo.  The bouncing around of time, provides some context to how life became under the rule of Bashar al-Assad, how checkpoints and emergency rule changed everything about Amina’s life.  As war creeps in it isn’t just inconveniences and fear, but also death, as further shown through Amina’s uncle who has joined the rebel army.  The family decides they need to flee to Lebanon and truly believe it will be just for a little while.

They rent an apartment for a year, but when they cannot afford rent they relocate to a refugee camp, where they stay for two years.  Amina’s father is determined that Amina stays in school but as work remains scarce and Youssef’s health continues to deteriorate.  Amina is forced to take a break from school to try and find work.  Eventually her father arranges to go by raft to Europe to try and start a new life and bring his family there once he is settled.  The terms of the loan to pay the smugglers is steep and when the raft doesn’t make it too far before tossing its passengers, Amina’s father Walid is forced to return to Lebanon unsuccessful.

It isn’t until Amina’s family considers, like many other families in the camp, to get her married to keep her safe.  That Amina upon picking up some aid at a UN reception center, spills everything to a worker there, and a week later the UNHCR contacts the family to help move them to Canada.  The readers at this point I would assume are relieved the family will be safe, and are surprised when the family isn’t sure if they want to leave.  Syria is there home, and before the mom will agree to anything, she wants to go back to Syria to see her newborn niece.  Once in Syria, she sees that her home is no more as she remembered it, and agrees to be resettled anywhere.  Through the same flashbacks and flash-forwards in time, we also see that life in Canada is not easy.  The family is welcomed and helped and grateful, but it isn’t yet home, and the ghosts of Syria are still present.

I kind of like how choppy it is upon further reflection.  At first it annoyed me, but as I thought about it more and more, I have decided I like that it isn’t easy and smooth and fleshed out, the tone of the unknown comes through by not over narrating the emotions and circumstances.  I also like that everything that happens to Amina and her family is anchored in reality and the footnotes, references, and facts are all in the Endnotes.  Having said that, I wish their was a little more character development, it reads like a bunch of facts strung together and connected by this fictional family.  There isn’t anything wrong with it, but a little more warmth for the characters would have added a beautiful level and would not have been hard to come by at all.  There are so many stories from this conflict out there, and the reason they resonate with so many isn’t from all the facts and numbers, but often from the individuals that make the numbers real and haunting.  I felt like this book fell short on the human element unfortunately.  The only character I really felt had some heart, was the dad, he was awesome, and his love for his family and determination for his daughter’s education was definitely felt.

The book does drop some acronyms and political alliances to add context but not overwhelm the reader.  It definitely hints that there are a lot of groups vying for power, and control: Assad, Russia, ISIS, US, rebels. 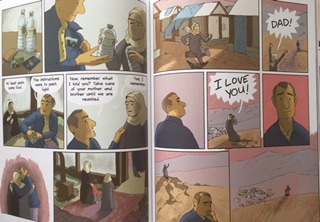 I love that the flashbacks to pre-war Syria are so relatable.  Kids need to really understand that we are all so much more alike than different.  Not just in our hopes and dreams, but even in our daily lives.  The characters in the book are the same as us, their lives look great,  maybe even better.  They have friends, and families and jobs, and cell phones, they also unfortunately, have war.

There were a few surprises for me, for example that buses between Lebanon and ISIS held Syria took/take people back and forth.  Similarly,  I was surprised to see that the punishment of smuggling cigarettes was being beheaded, but maybe more surprised that the book included it.

It is reassuring for readers to know that the family survives, but the harrowing journey of seeing body bags, cutting costs to survive, risking it all to trust smugglers with fake life jackets, paint pictures of a journey that will stay with the reader.  The book doesn’t talk down to anyone, if something seems too simplistic, it almost encourages the reader to go research more about it.

There isn’t any mention of Islam or religion, the females wear hijab, that is the only indication along with their names that they are a Muslim family.

The violence, is pretty haunting and while the images and text aren’t graphic, the splatter of blood and guns and death are very present.  There is also mention of cigarettes.  While not explicit and possibly over the heads of some readers, the book does show that the loan sharks would be willing to take Amina, “Something nice and sweet…like you,” to help pay off the family’s debts.  A former classmate of Amina also invites the family to her wedding.  At 13 Amina’s family is also considering getting her married as a way to help keep her safe.

This book would be better in Social Studies class more than in a Language Arts one. It would be a great supplement to share even, when discussing current events.  Its a quick read, a factual account and a powerful one at that.