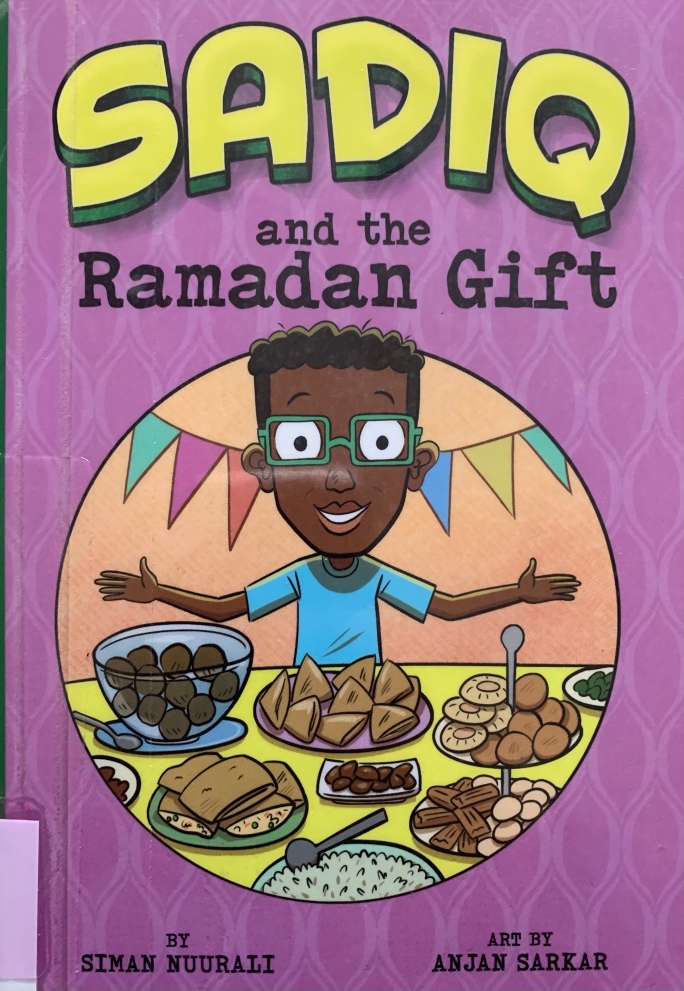 This 65 page early chapter book in the Sadiq Series does a great job of introducing Ramadan, giving a glimpse of Somali culture, and conveying a relatable and engaging story about friends with a lesson/reminder about the values of communication.  A group of boys hosting a fundraising iftar to help a school in Somalia have to figure out the logistics, the marketing, the cooking, and the execution, as they become socially aware and active in helping meet the needs of their community, both locally and afar.  This OWN voice tale doesn’t shy away from authentically drawing on religion and culture to make characters and a plot that all readers can enjoy.  The book is not preachy, but the characters know who they are in their manners, dress, speech, and environment.  A great book any time of year for first grade and up.

With Ramadan starting in a few days, Sadiq and his friends at the Dugsi are reviewing the importance and values of Ramadan.  This year the masjid is raising money for a school in Somali and the students are encouraged to help, as sadaqah, or charity, is especially important during Ramadan.  The boys decide to host a fundraising iftar at the masjid and with parental help to coordinate with the Imam, the kids have to figure out how to get enough food, get the word out, get set up to take donations and more.  They make flyers, set up a website and shoot a small video.  The once excited Zaza, however, is no longer very enthusiastic in the Money Makers Club and Sadiq can’t figure out why, but with so much to do and little time to get it done, more friends and family are brought in to help, and things continue on.  When Zaza tries to tell Sadiq he wants to do his own fundraiser, Sadiq doesn’t want to listen.  I’m not going to spoil if the two friends work it out and how they handle the two ideas, but it is a good lesson in friendship, communication, and charity, Alhumdulillah.

I love that the story starts with information about Somalia and words in Somali as well as a picture of the family.  There are activities and questions at the end as well as a glossary of religious, cultural, and English vocabulary words. The book doesn’t assume that the reader knows anything about Islam or Somalia, nor does it assumer that the readers don’t.  It strikes a balance of not talking down to the reader or getting too wordy.  It simply provides the information needed if you are curious, but allows the story and the boys dilemma to take center stage.  The whole series is remarkable in showing diversity and relatability with good quality story telling.  I think this is the only book in the series that has a religious theme, I could be mistaken.  The illustrations show the boys in kufis and the women in hijab. 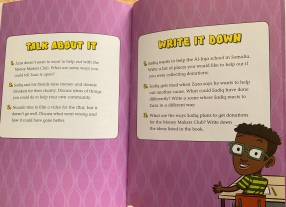 Every elementary school library and every first through third grade classroom library should have this series.  I know my public library has it, and the copies I get from there seem to be worn and loved.  The age is too young for a book club, but would be great in small groups or for outside reading with the short chapters and engaging illustrations.

This new series featuring Sadiq, a Somali American living in Minnesota, is great for early chapter book readers looking for representation and diversity.  There are four books about Sadiq, his family, and his friends and classmates in third grade, and all are either an AR 3.6 or AR 3.5.  At 57 pages long, divided into five chapters and filled with bright and colorful illustrations students in grades 1st through fourth, depending on reading level and interest, will enjoy these simple plotted, yet relatable stories.

Sadiq’s friends are all getting ready to try out for football, but his parent’s say that he is too young for such a rough sport and has to wait until he is 12 like his older brother, Nuurali, did.  Sadiq’s parents and family encourage him to try another sport, and with a new running club starting in a few days coached by a member of the national team, that’s what he opts to do.  Begrudgingly he joins the team, but is hurt when his friends talk about how much fun football is and how much more tough and difficult it is compared to running.  While this is going on, he is getting support from his brother to keep running, and from his teammates, but it is hard and he doesn’t enjoy it.  Slowly, he starts to improve, however, and with the Fun Run the climax of the book he sails across the finish line in first place when he sees his friends have come to cheer him on!

I love that the book/series proudly features a Somali-American-Muslim family.  There is information about Somali at the beginning as well as some Somali terms and a portrait with names for the members of Sadiq’s family.  The mom and older sister wear hijab, “Salaam” is one of the defined words and the characters use it when they meet.  I also love the diversity of skin tones in the illustrations and one of the girls on the track team wears a scarf as well.  There are Muslim named kids and non Muslim named kids in the story, and while Islam isn’t mentioned outright, it is definitely represented through the characters words, names, and appearances.

The story is straightforward and perfect for the age group, the books in the series do not need to be read in any order, and you will get to see the different supporting casts featured more prominently in different books, thus getting to know Sadiq and his world.  I like that he doesn’t get his way, and doesn’t get to do what all his friends are doing, but he makes it work.  He is grumpy and upset, but he doesn’t get obnoxious or overly whiney.  I think this subtly gives readers some tools and insights to model in their own disappointments.  I also like that while he has to put in the work and fix his attitude, he doesn’t have to do it all alone.  His family and coach are supportive, and eventually his friends apologize and support him too.  For the simplicity of the book, you actually do get invested in his little trial and want to see the outcome.

None, it is clean.

This book is like a boy protagonist version of the Meet Yasmin books, they show a kid of culture in everyday experiences.  The target audience wouldn’t make it work for a school wide book club, but I think early elementary teachers would benefit from having the series in their classrooms and letting kids in small groups discuss if they want. These books would be great for first graders that are way above reading level and parents are struggling to find appropriate books.

The end of the book has some resources as well: a glossary, discussion questions to talk about and some to write down, as well as a home workout guide and information about the author and illustrator. 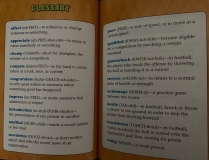