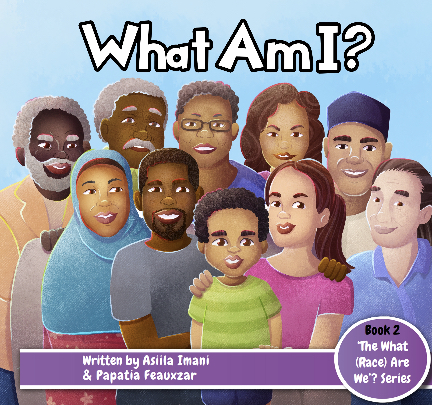 This incredibly important 37 page picture book highlighting a little boys heritage will speak to children who see themselves in his quest to answer what he is, as well as (hopefully) inspire them to search out their own family ancestry and unique make up.

The book is not a traditional story book, in fact there isn’t much of a storyline, but the concepts presented show how beautiful and amazing multi-cultural and multi-ethnic families can be.  A lot of cultural information is conveyed and celebrated about Samoan and Pacific Island traditions as well as Islamic ones. 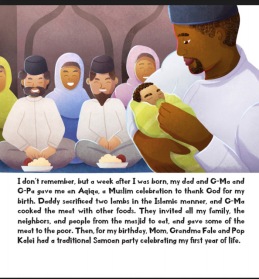 There is an aqiqa at the time of his birth as well as a Samoan party with a Hawaiian band.  Some members of his family cover, while other’s don’t.  He remarks how he has extra grandparents which equal extra blessings, and how he has a half brother because they have different dads.

In addition to geography, there is also a STEM component as six-year-old Toa Idris learns he is a quarter this and half that through understanding fractions as visualized by slices of a pizza.  At one point Idris remarks that, “I can’t keep all those people and places straight,” and after reading the book half a dozen times, I honestly couldn’t either.  But, I think that is ok.  The point of the book is that being diverse is amazing, and having people love you is important, and culture and tradition and faith all make you richer. 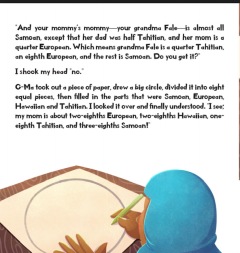 The text on each page is presented in a fun font, as are the pictures.  Really there is just one picture that makes Idris look angry and it is used in the story and the title page, which is unfortunate, I think it is supposed to have him look pensive, but it seems a bit off to me, where all the other pictures ooze with warmth and richness.

I honestly don’t know what age group would benefit the most from the book.  Younger kids that may have been asked what their culture is will be empowered by having it reinforced that they are made just how Allah swt planned them to be, older readers will be able to create their own pizza slices, so to speak, and understand their own pieces, but I feel like both groups might need some coaching from an adult.  There are family trees at the beginning that almost become reference pages while reading the story and trying to keep everyone straight, that make the book almost interactive.  Muslim and non Muslim reader alike would learn about new cultures, and benefit from the “Extras” at the end.  Honestly, overall there is just a lot of information tossed around in the book, which isn’t a bad thing, it just might make it a bit more hit or miss if it will work for your child.