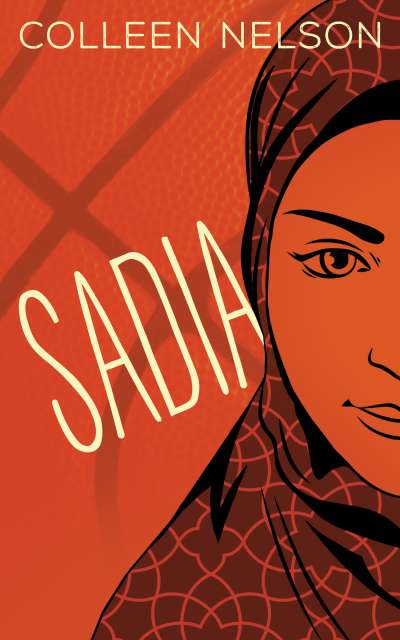 A middle school sports book with a female lead who wears hijab written by a non muslim.  The book could really go a lot of ways, I held my breath for all 239 pages waiting for something to go totally awry, and thankfully it never did.  In fact I read the book nearly straight through and while meant for ages 12 to 15, I quite enjoyed it.

Ninth Grader Sadia Ahmadi is an immigrant from Syria, her family left before things got “bad,” and while she has adjusted to life in Canada, High School is testing her in other ways.  Her best friend Mariam, an immigrant from Egypt, has started dejabbing, taking off her hijab to fit in it seems any chance she gets.  This is taken as a betrayal by Sadia and their friendship waxes and wanes throughout the book as each girl has to figure out who she is in relationship to hijab, and how to judge and/or accept each other and their choices.  Throw in a new refugee girl Amira from Syria who doesn’t speak English, a co-ed basketball tournament that doesn’t allow any headgear to be worn during games, a cute boy on the team and an awesome teacher with interesting assignments and you have the book in a nutshell.

I like Sadia, she is believable and strong.  She is well liked, athletic, she has a good relationship with her parents, brother and teachers, she prays and fasts and owns who she is, but she isn’t perfect.  She is hypocritical at times, and acknowledges it, she is tempted by parties, and boys and taking off her own hijab to play ball, and has to confront it about herself.  She doesn’t do things like pray on time, like she knows she should, but there she is and I am so impressed that the author picked up on so many nuances of Muslim life in her research or in her own observations as a teacher.  Yes, Amira has an awkward observation about Miriam being Muslim and not wearing hijab that seems really one dimensional considering large numbers of Muslims in Egypt and Syria don’t cover, but I don’t know if that was the author’s attempt to draw the issue to the light or if it was just a misstep.

I like that there is a cute boy that accepts Sadia and who she likes as well, but they don’t do anything.  So often, these books become overrun by the romance story line and this one doesn’t, thankfully.  It seems to find a realistic balance, that she has feelings, but isn’t going to act on them, and based on her mom figuring out when she is lying that she won’t try and sneak behind her mom’s back.

Issues of halal food are mentioned in passing and it fleshes out that the girl is Muslim, not just going through the motions.  At times it is hard to know if her choices are based on belief and faith or expectation, but for an early YA/Middle School book, I think it suffices.  She mentions modesty as a reason for hijab, but also a lot of parental and cultural expectation.  One central theme the reader just has to go with, is that Sadia and the rest of the characters in the book, and there are a fair amount of Muslims, don’t know about any other ways to wear hijab for sports.  I get that Mariam and her sewing ability is a huge arc in the story, but they have smart phones, and its a contemporary piece, they have to know about Ibtihaj Muhammad in the Olympics, Bilqis Abdul-Qaadir, and Nike making athletic hijabs.  So, to make the story work you do have to turn a blind eye to the fact Muslima’s have taken to sports in the mainstream and that there is no way they can all be that clueless about her fabric, style, and covering options.

I love that the issue of refugees is addressed in the periphery, and the issues are given a human face.   I love that Sadia’s parents are religious, but not left as simple stereotypes, they deal with Islamaphobia, but aren’t looking for sympathy.

There is always the case, that the hijab becomes a stereotyped item as the story involves characters torn to wear it or not, but I loved how judgements were called in to questions and there wasn’t an easy answer.  The side friends in the story are all way too good to be true, but I think the whole book has a bit of a pollyanna feel to it, and in this case it was ok to error on the side of kindness than become overtly sensationalized and whiney.

The biggest hurdle this book faces is, is it the author’s story to tell. And I don’t know, I review a lot of books, and many are by Muslims and they get stuff wrong in my opinion, or they go so extreme to be accepted.  So, I don’t know, I think the book had heart, I didn’t know if the tournament would let Sadia play, I didn’t know if she would sneak off to the party, I didn’t know if she would cross the line with Josh, and I was curious, and invested and sucked in to it all.  Is it a book to teach others about Muslims or a book for Muslims to see themselves? I think all of the above.  Muslim’s should control their own narrative, but I think when author’s get so much right, we have to take some reassurance in the idea that we are being accepted by the larger society, and our stories are being told with love by other’s too.

There is romance and lying, but no kissing, just hints at emotions or an errant arm flung over a shoulder during a huddle or photo.  There is mention of drinking at the parties, but Sadia doesn’t end up attending.

I don’t know that I would do this as a book club selection, but if I met the right group of kids, I would definitely reconsider.  There is a lot of basketball, which I quite enjoyed, but I could see other’s maybe getting bored by the play-by-play.  I’ll make my daughter read it in a few years, and I look forward to discussing hijab and how she feels about it after.  It does raise the subject, and ask you to check your judgements on yourself and on others.