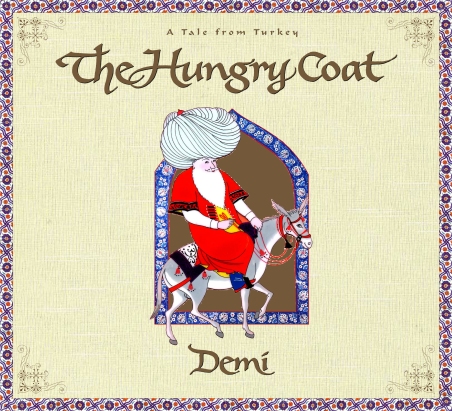 It really bothered me that I didn’t love the version I read of  The Parrot and the Turkey about Nasreddin Hodja, especially after finding out how entwined he is in Turkish culture, and reading some of his tales online.  So, when I found that Demi had also rewritten and illustrated a tale from his collection I was anxious to check it out.

The  Hungry Coat is a charming story and Demi does a great job of bringing it to life with her pictures and storytelling abilities.  The book is 36 pages and a 4.1 on AR.  The text isn’t overwhelming in volume, but to read it definitely requires a bit of an older child’s vocabulary.  Words like caravansary, hostel, banquet, frisky, and commotion are scattered through out.  However, to listen to the story and to understand the message Nasrettin Hoca (an alternate spelling) is conveying, is easily enjoyed by children four and up.  The story flows very smoothly and the catch line of “Eat, coat! Eat!” makes the story absolutely delightful.

Nasrettin Hoca always keeps an apple in his pocket for any goats he might pass while he is out and about.  One day he helps round-up a goat that has gotten lost, and in all the commotion had become quite a mess and lost too much time to go home and change his clothes before heading to a friend’s house for dinner.  Deciding to go in his patchy, smelly clothes, Nasrettin soon finds that none at the dinner party will sit by him, or even sit facing him.  He slips out quietly from the gathering and has an idea.  He goes home and preens himself, and returns to the party where he is greeted with attention and kindness.  At dinner he begins placing the food in his coat, rather than eating it.  Each time he opens his coat he commands it to eat.  After he fills his coat he pats his belly to the bemusement of all around him as they ask him what he is doing.  He makes his point that when he came in his old coat he wasn’t fed, but when he came dressed so beautifully he was, and thus clearly the coat was invited to dinner, not him.  Everyone cheered and learned the lesson. 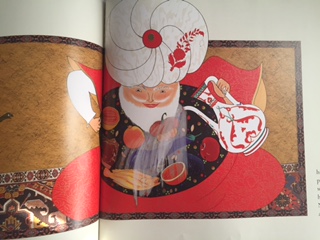 The illustrations are rich and detailed, but I did find myself a little put off when Nasrettin seemed to go from looking like an old little man, to being very effeminate.  The inconsistency bothered me a bit, which surprised me for a Demi illustration.  Also, it is worth noting that there is mention of wine in the story, that many may find off for a children’s book, particularly one about Muslims (Nasrettin was an Imam and a Dervish, so he may have drunk, I’m just saying it surprised me).  The last two pages of the book are an afterword about Nasrettin Hoca in real life and the influence of his folk tales and lessons.

This book attempts the enormous task of creating a picture book biography for kids about Prophet Muhammad (Peace and Blessings Be  Upon Him).  While the text seems adequate and engaging for children with a basic knowledge of RasulAllah’s life, I think it would overwhelm any young non-Muslim reader.  The story starts with Prophet Muhammad’s birth and tells about the major aspects of his life, both as a family man and as a leader.  The text includes ayats from the Qur’an and hadith.  THe information is presented as fact, it doesn’t preface statements by saying, “Muslim’s believe,” making the book a solid, yet dense, book for Muslims of all ages and a good introduction to Islam and Prophet Muhammad (pbuh) for older non-Muslims as well.

The book has an AR level of 6.7 and is beautifully illustrated.  Some of the illustrations are borderline irreverent, but it is clear that Demi truly respects the Islamic tradition of not depicting Prophet Muhammad (pbuh).   I think it is more jarring because most Islamic books do not depict the angels, buraq, or any of the prophets, where Demi does in her book.  Prophet Muhammad is depicted by a gold silhouette and the proper blessings are bestowed upon him whenever mentioned in the text.

Demi includes a foreword at the begining of her book that explains some of the diction choices and background on the artistic style used, there is also a bibliography at the end of her 42 page story.  The book is ok for independent readers or in small groups to discuss, however for anyone younger than 3rd grade, it is probably just too much information.