A fable with lessons of kindness centered around the Salawat, definitely is a great premise and for the most part I really enjoyed the book. 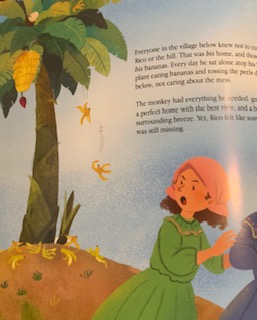 The 8.5 by 8.5 hardcover, 50 page book feels great in your hands and the illustrations are sweet and expressive.  The book is long, and is text heavy so I’d say the target audience is maybe 6 to 10 years old.   The font is incredibly small and irritating.   It should have been larger and more inviting to children in my opinion.  It doesn’t match the size, binding, and illustrations, and actually becomes a distraction if trying to read it in a group setting.

The story itself is smooth and intentional.  Rico, a blessed, yet ungrateful monkey, lives atop an ever abundant banana tree.  However, he attributes his blessings to his own hands and does not thank Allah swt.  He is mean and greedy toward people and animals alike.  Yet, something is missing in his life and he doesn’t know what.

When a little mouse, Chico, comes to him to ask for a banana and gets scolded at instead.  Chico makes dua for Rico asking Allah to guide the monkey to goodness.

Tucana, a toucan, then stops in Rico’s banana tree after a long flight to be rebuffed by a foul tempered monkey who wants to be left alone.  When Tucana  leaves she forgives Rico for his rudeness and asks Allah to be merciful to him as well. 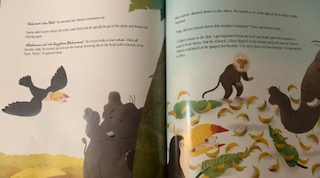 Rico then makes signs to keep people and animals away.  Which works for a while, but along comes Simon, an elephant, one afternoon to ask the monkey to climb his tree and help direct him back to his herd.  Rico of course refuses, and Simon reminds him that they are brothers in Islam and to please help. He begins shouting at the elephant to leave, and as Simon is pacing back and forth, he slips on the banana peels, grabs the tree to support himself and shakes the tree back and forth in the process.

Rico begins hollering for help and sure enough the animals he had turned away previously, return to help him.  They had forgiven him as they hope Allah will forgive us all.  To calm the monkey, chico shouts, “Salawaat’alan Nabi!” in Simon’s ear and when he recites “Allahuma sali’ala Sayyidina Muhammad,” peace and calmness is restored. 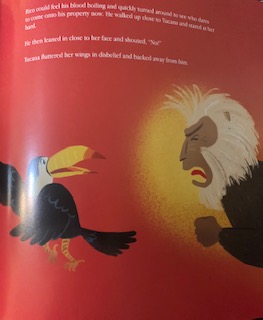 With all the bananas on the floor, many mushy and trampled, Rico has to decide if he learned a lesson, and how he will put his new knowledge into action, or if he will resume his life of ungratefulness. 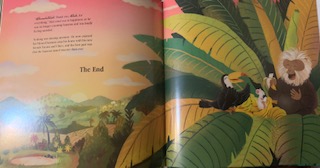 The book ends with each animals favorite banana recipe, information about the author and illustrator and benefits of reciting Salawat and an ayat from the Quran.

The story and how it weaves Islam into the lessons is beautifully done, my only hiccup is the constant refrain of Rico counting his bananas.  I realize it is a fable, and maybe with talking animals interacting with humans, reality is notably suspended.  But, it seems misplaced to me.  How do you constantly count a perishable item? Does Rico only eat a certain amount a day? How many new ones grow a day? What is the number that he is adamant to have at all times? So, many questions, that I didn’t get why he was counting them, why he was irritated when he lost count, and why this detail was in the story and a big part of the story none-the-less.  Like the font, its a minor detail, but a distracting one for me unfortunately.  Clearly, however, I’m in the minority as the book has won the Moonbeam Children’s Book Award and the Islamic Writer’s Alliance Creative Story, so give it a read, and let me know your thoughts, jazakhAllah kher.