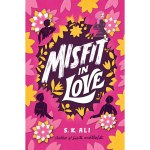 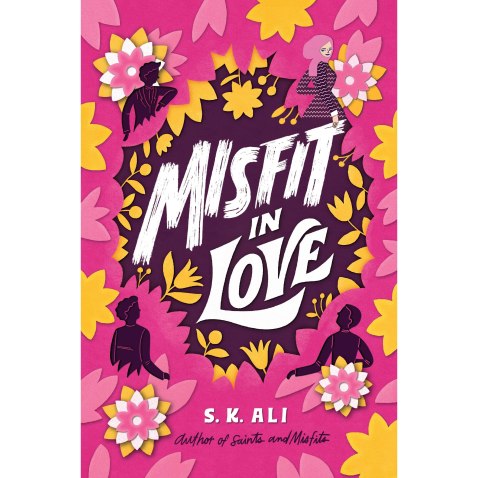 I reread my review of Saints and Misfits before diving in to this sequel that can also work as a stand alone, and imagine my absolute delight when all the things I wanted more of: Muhammed and Sarah, the mom, Jeremy, etc., were explored in this wonderful high school and up, 320 page, romantic comedy story.  The romance stays halal and the comedy light, but seamlessly interwoven into a weekend wedding are very serious notions of racism and prejudice within the Muslim community.  The writing is flawless as I tried to tell the summary to my daughter I realized just how many characters there are in the book, yet while reading, I never once was confused about who someone was or how they fit in to the family, it really is quite remarkable how real and personal the characters all become.  In many ways the story is uniquely an American-Muslim (arguably) one with characters that are half this culture, a quarter that, wearing cultural clothes to coordinate with friends, mutli lingual, multi ethnic, and yet all coming together as friends and family.  We, nor are the characters perfect, but that our weakness is explored in fiction so that we all might benefit in reality, is truly remarkable.  I honestly couldn’t put it down, and my teen and tween children may or may not have had to figure out their own meals, as I hid in the corner to devour this book in a single day. I regret nothing.

Janna Yusuf has just graduated high school and has been spending the last few weeks at her father’s sprawling house on a lake to help with wedding preparations for her beloved older brother.  What started out with plans to be a small nikkah between Muhammad and Sara, has quickly snowballed into a “wedding” with a few hundred guests and an ever evolving color scheme.  With extended family and friends pouring in over the three days, Janna is anxious to see Nuah and finally tell him that she is ready to return his feelings, reunite with her mom after being apart for weeks, and see who her best friend Tats is bringing as her plus one.  But, Nuah is acting weird, her mom seems to be considering remarrying, and her father is revealing himself to be racist.  There is a lot going on, and in between wedding preparations, possible crushes, family drama, prejudice overtones, and a curious ice cream man, Janna is having an unforgettable weekend.

Janna and Muhammad are close, they are the children of an Indian American non practicing father and an Egyptian American religious mother.  Their parents have been divorced for a while, and their dad and his Greek wife Linda have two little boys and are hosting everyone and the wedding.  The heart of the story is Janna as she thinks she is ready to pursue something halal with Nuah, but is slightly intrigued by Sara’s cousin Haytham and very perplexed by her mother’s potential future new husband’s nephew Layth. Being it is a wedding, and many people are staying at her father’s house and many more at the hotel in town with their own families.  Jana is trying to figure stuff out about Nuah while hanging out with Nuah’s older pregnant sister.  She is constantly thrown together with Layth as she meets his Uncle Bilal, her mom’s college friend that has proposed to her, and who’s own daughters are friends of Sarahs.  Yeah, there is a lot of overlap, a lot.  It’s like real life. As attractions wax and wane in such a short time, it is the relationship Janna has with her own family and the contentment she must find within herself that ultimately matter most.

I love how authentic the story and its characters are.  I come from a small family, but a very close friend has a huge family, and this just reminded me of going to her family events and finding how interconnected and small the world really is.  I absolutely love Janna, she is Muslim by choice through-and-through and is genuine in her understanding and actions that, while the book is meant for Muslims and nonMuslims, she really sets the standard of how fictitious characters can positively affect their readers.  The only slightly forced thread for me was Janna suddenly loving animals and being ready to head to Peru.  I get that she was crushing, but it seemed a little too over the top for an otherwise very plausible plot.

The best part of the book, in my opinion is that it isn’t all fluff and fun, there are some very real issues that get spotlighted.  Like in Saints and Misfits where Janna is sexually assaulted by a seemingly devout, religious, well liked male, this story addresses racism and prejudice within the Islamic community.  Janna’s dad always felt treated as less than by Janna’s mom’s family for not being Arab.  He flat out warns Janna about her feelings for Nuah because he is Black.  Sarah’s Aunt is offended that the mendhi is more Desi than Arab.  The issues aren’t just pointed out, they require active acknowledgement and action.  The author’s note at the end, even discusses the significance and weight of such views at the end.

There are mentions of the sexual assault that happened to Janna in the first book.  There is mention of periods, a possible affair, racism, and a character who drove while drunk and killed his son as a result.

I don’t know that this book would be a great fit for a school book club, but I think a group of high school or college aged girls would thoroughly enjoy reading this and discussing it, and I would totally invite myself to their gathering to do so. 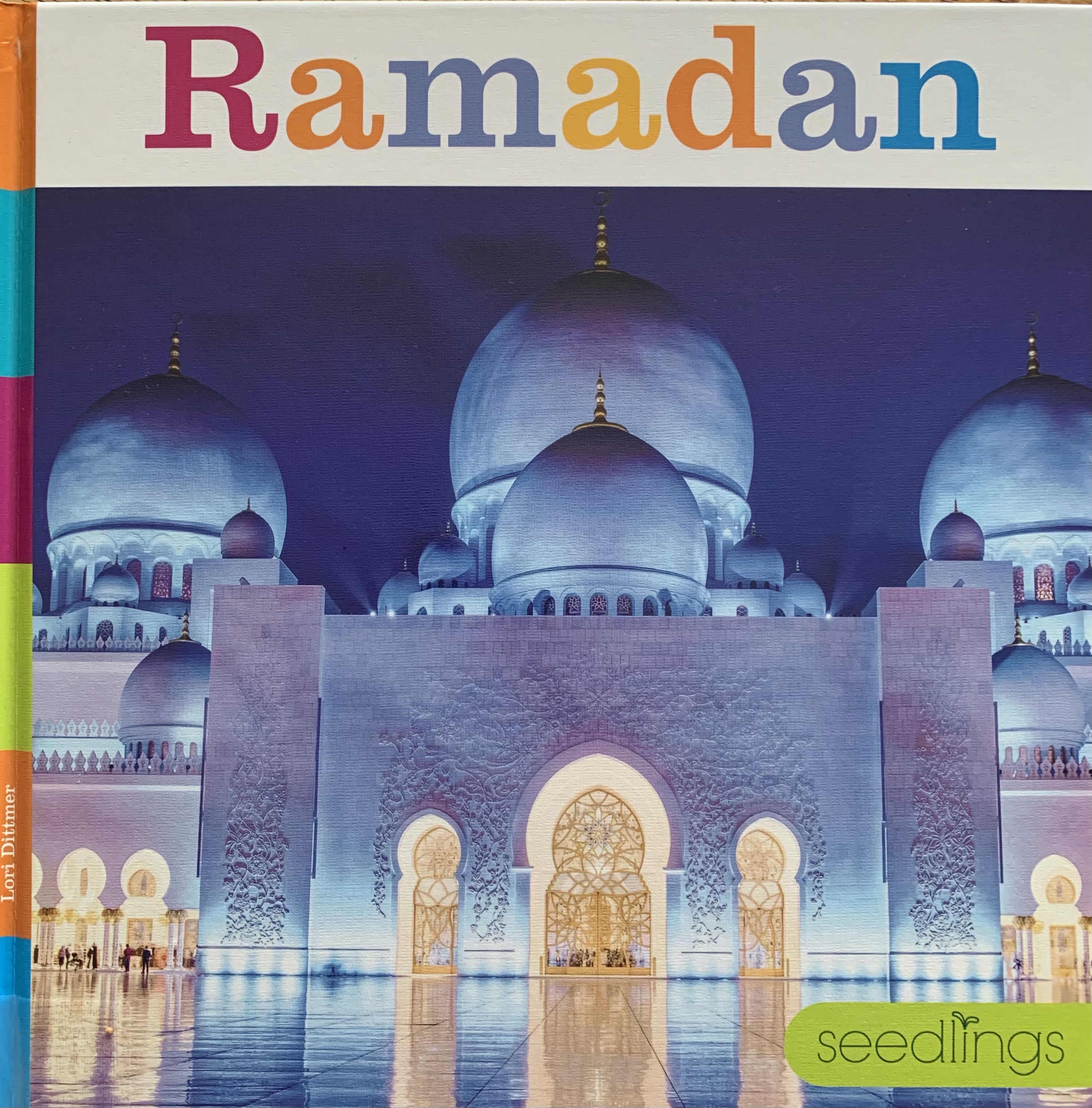 I understand and appreciate that every time a series of holiday books come out Ramadan is bound to be included, but this 2021, 24 page kindergarten geared nonfiction book really offers nothing new.  In fact, while the realistic photographs on each two page spread are nice, I take issue with the page that says, “In A.D. 609 the prophet Muhammad began writing a book.  The Quran is God’s word to Muslims.” First of all, Prophet Muhammad (capitalize the P please), didn’t write the book and the Quran is for all people. 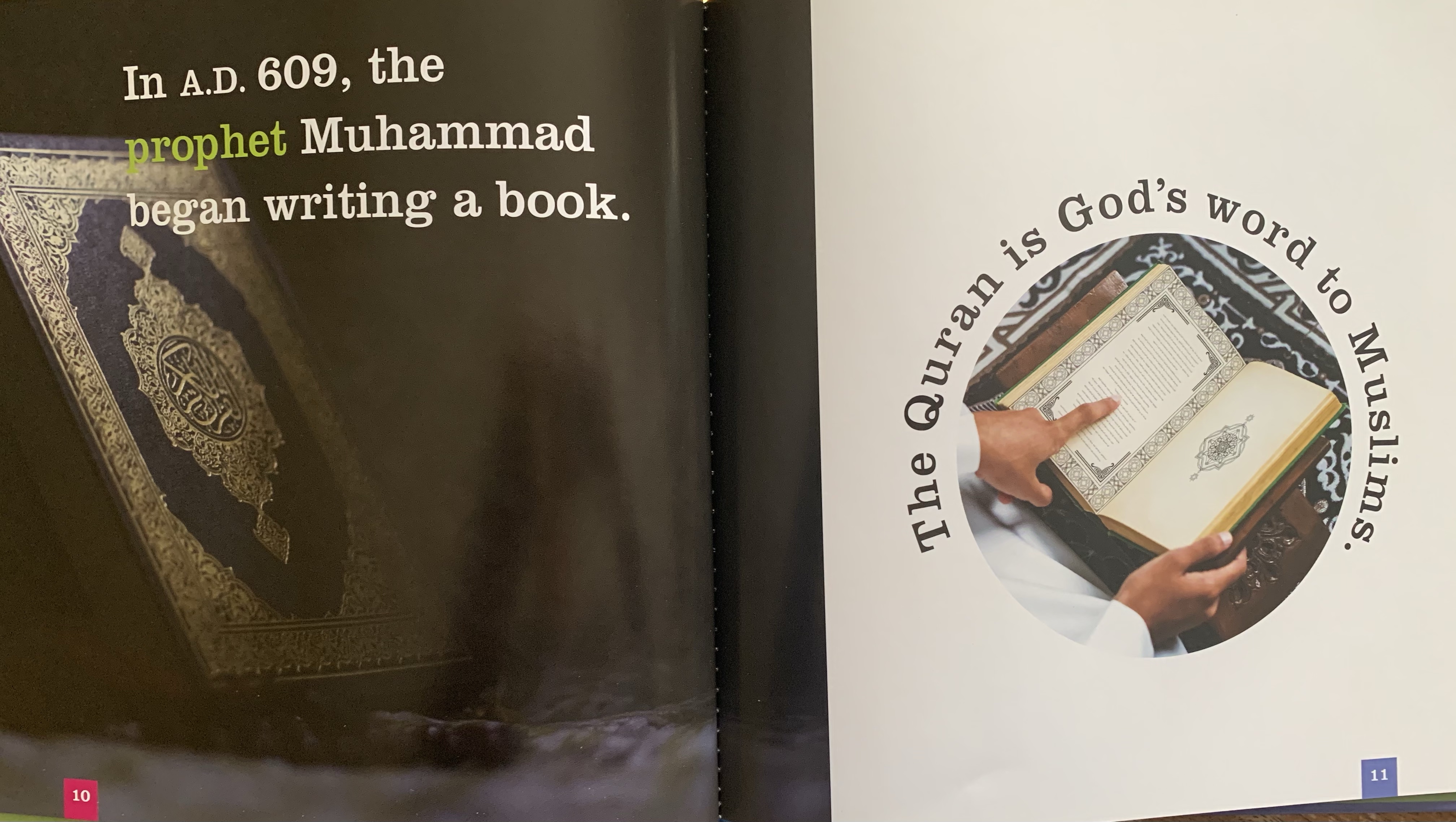 The book starts out welcoming Ramadan and showing a child in sajud, without explanaition, I wonder and worry how a non Muslim child woud understand this act.  Would they take it as an act of worship? Not sure. 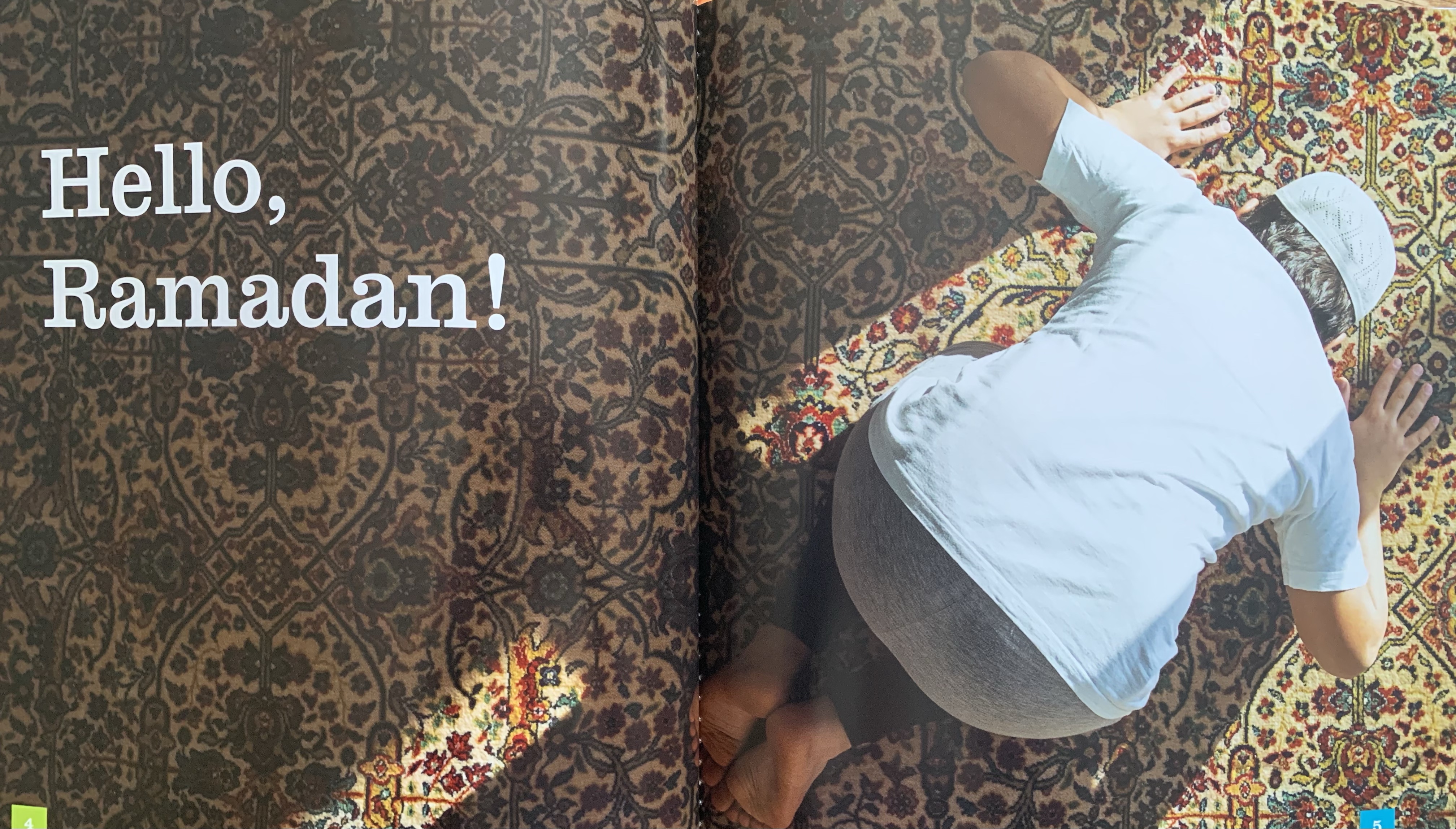 The next page mentions Ramadan as a time of prayer and thinking of others before explaining that it is the ninth month of the Muslim year and starts with the new moon. 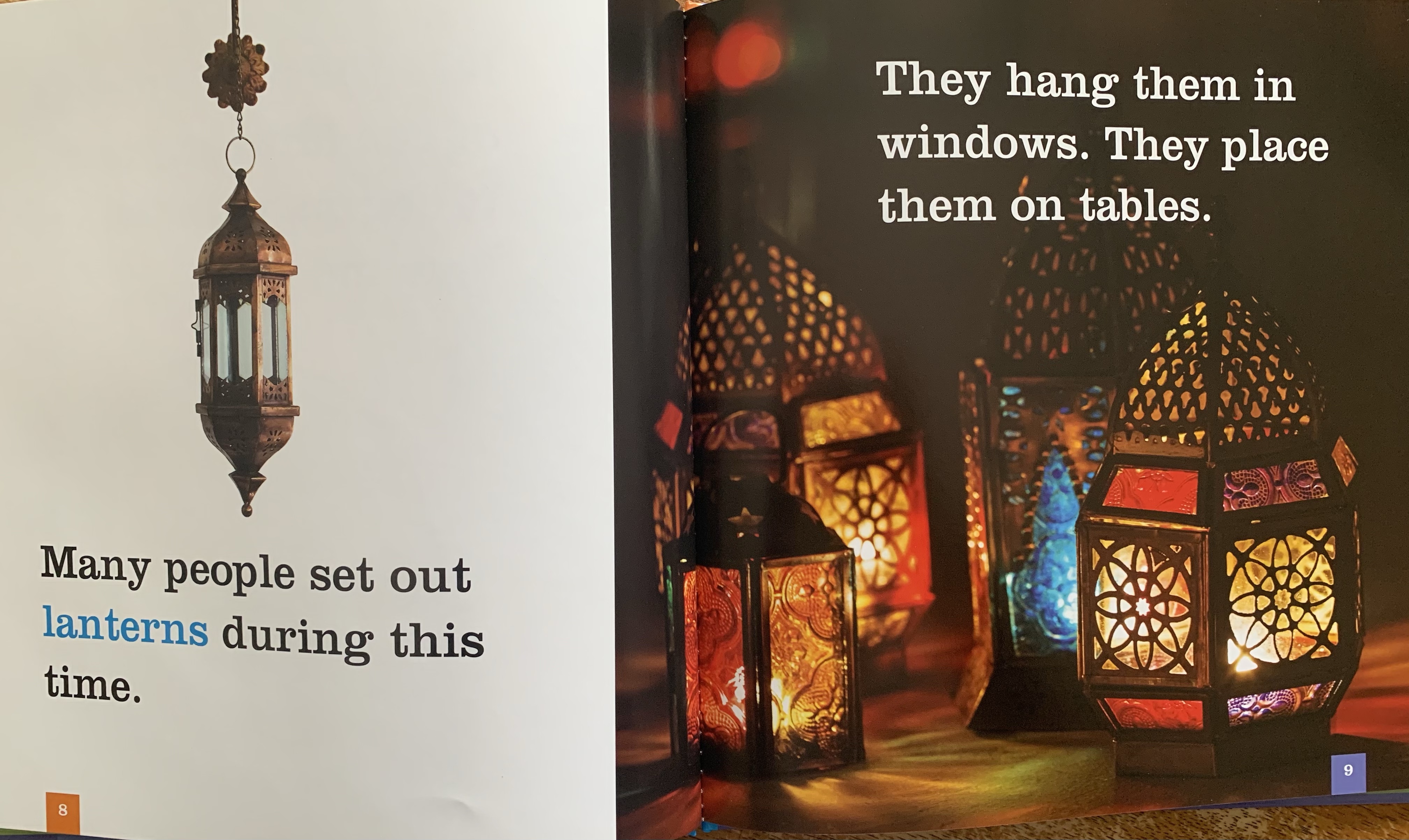 It then details that lanterns are set out and hung in windows by many, but doesn’t tell why or hint at cultural reasoning.  The problamatic page follows, and then it shows an older man reading Quran and says that some repeat the whole Quran during the blessed month. 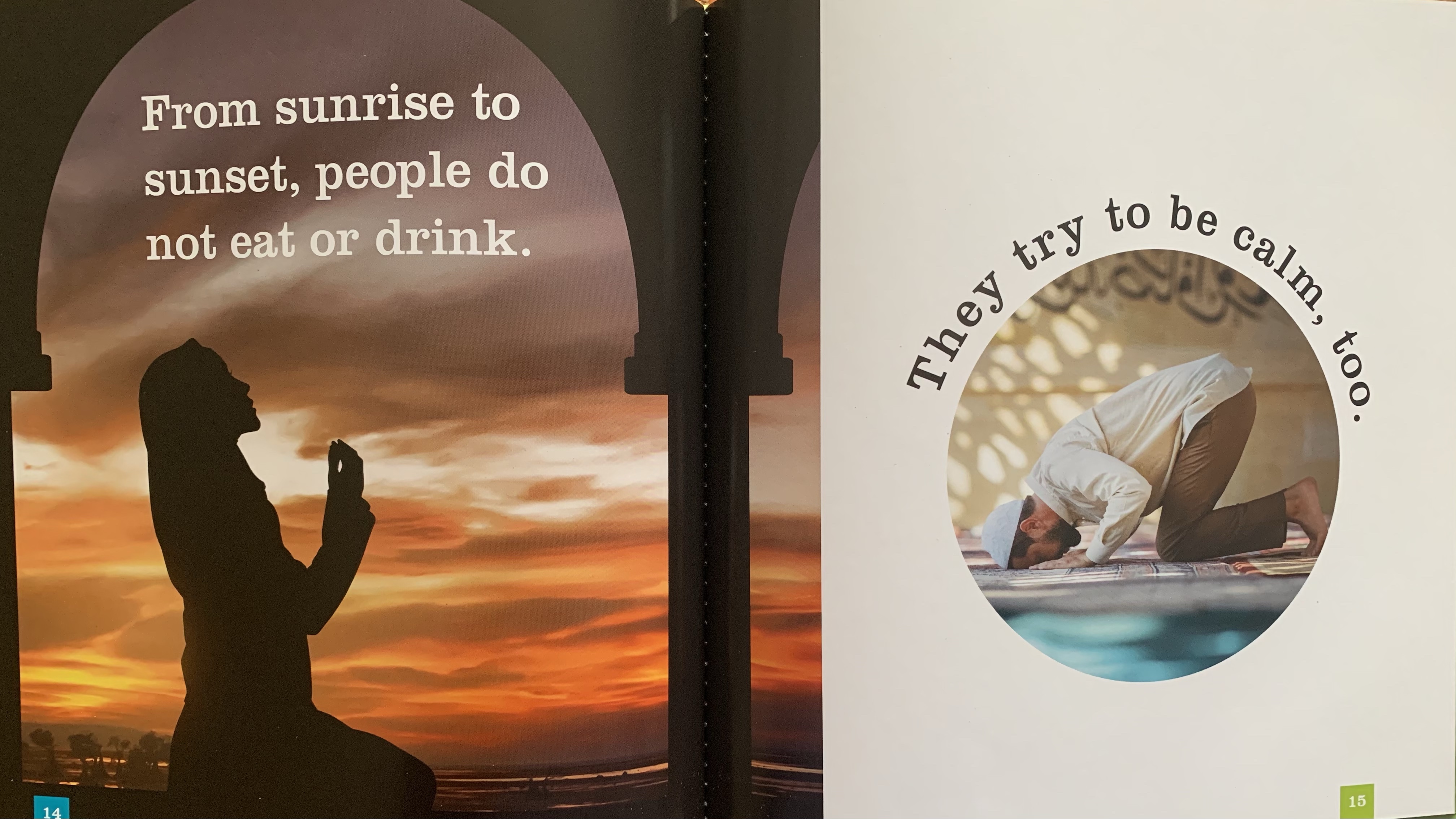 I like that it mentions that from sunrise to sunset people do not eat or drink and that they try to be calm.  At night people eat dates and drink water and share a meal called iftar.

There are then pictures of Ramadan, a lantern, iftar, dates and Quran, before a page of vocabulary, further reading suggestions and an index conclude the book.  The definition for prophet, seemed a little off for me, “someone who speaks for God.”  Why not say someone who spreads God’s message? 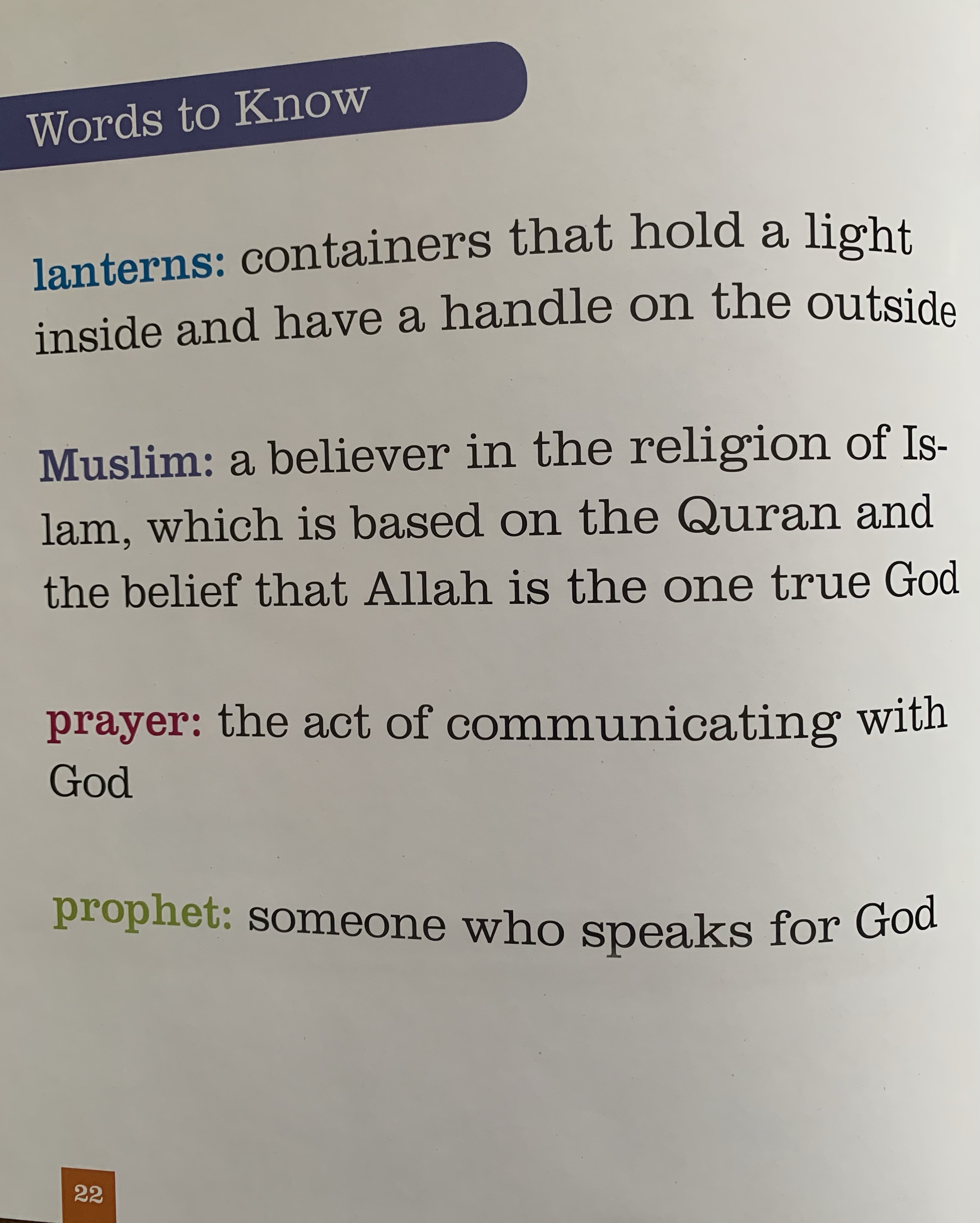 I wouldn’t encourage this book be shared with little ones, or in interfaith, like I said, there are much better fiction and nonfiction books about Ramadan for this age level. 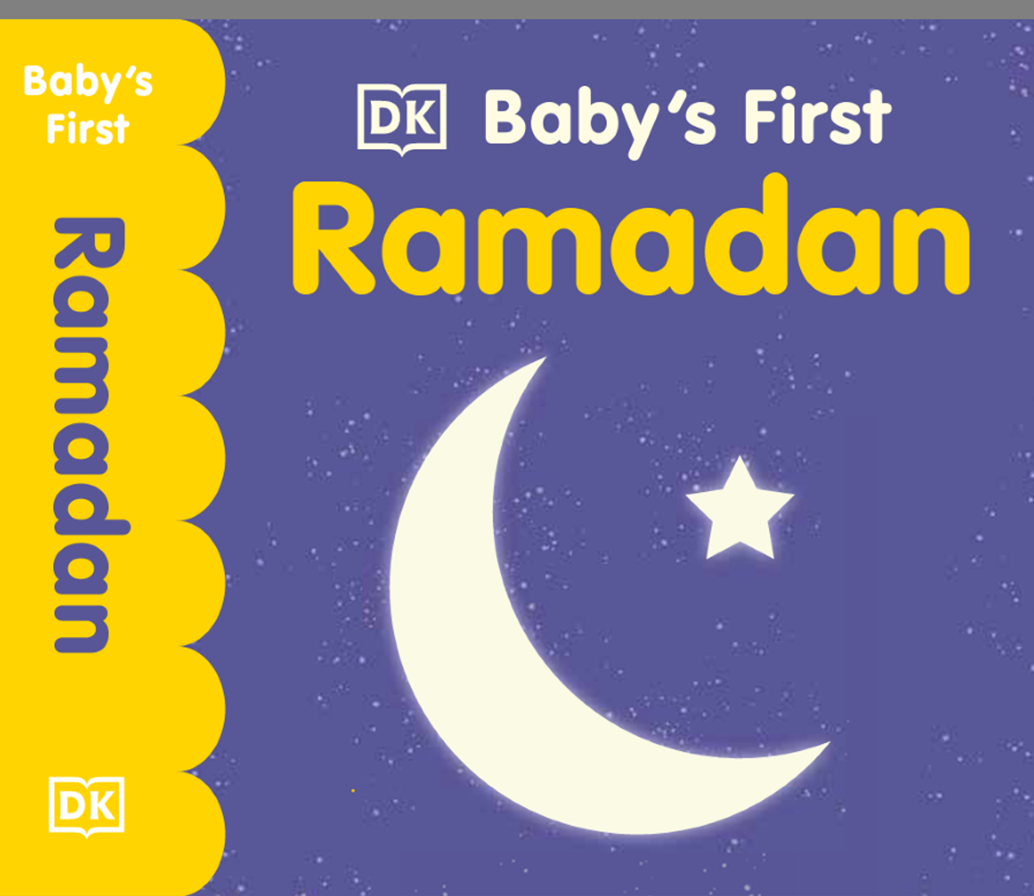 I was excited to see publishing company DK add this Ramadan book to their board book selection, but overall it didn’t wow me, or even really impress me.  It has realistic pictures of diverse Muslims celebrating Ramadan, simple text, and bright images, but it read awkward as it switched between first and third person, realistic and stock looking images, and not terribly enticing with slightly faded mehndi and unexplained foods.  There are better board books out there for babies and toddlers than this 12 page mainstream published one.  If you can find it at the library, sure check it out, but I’d save my money on purchasing it. 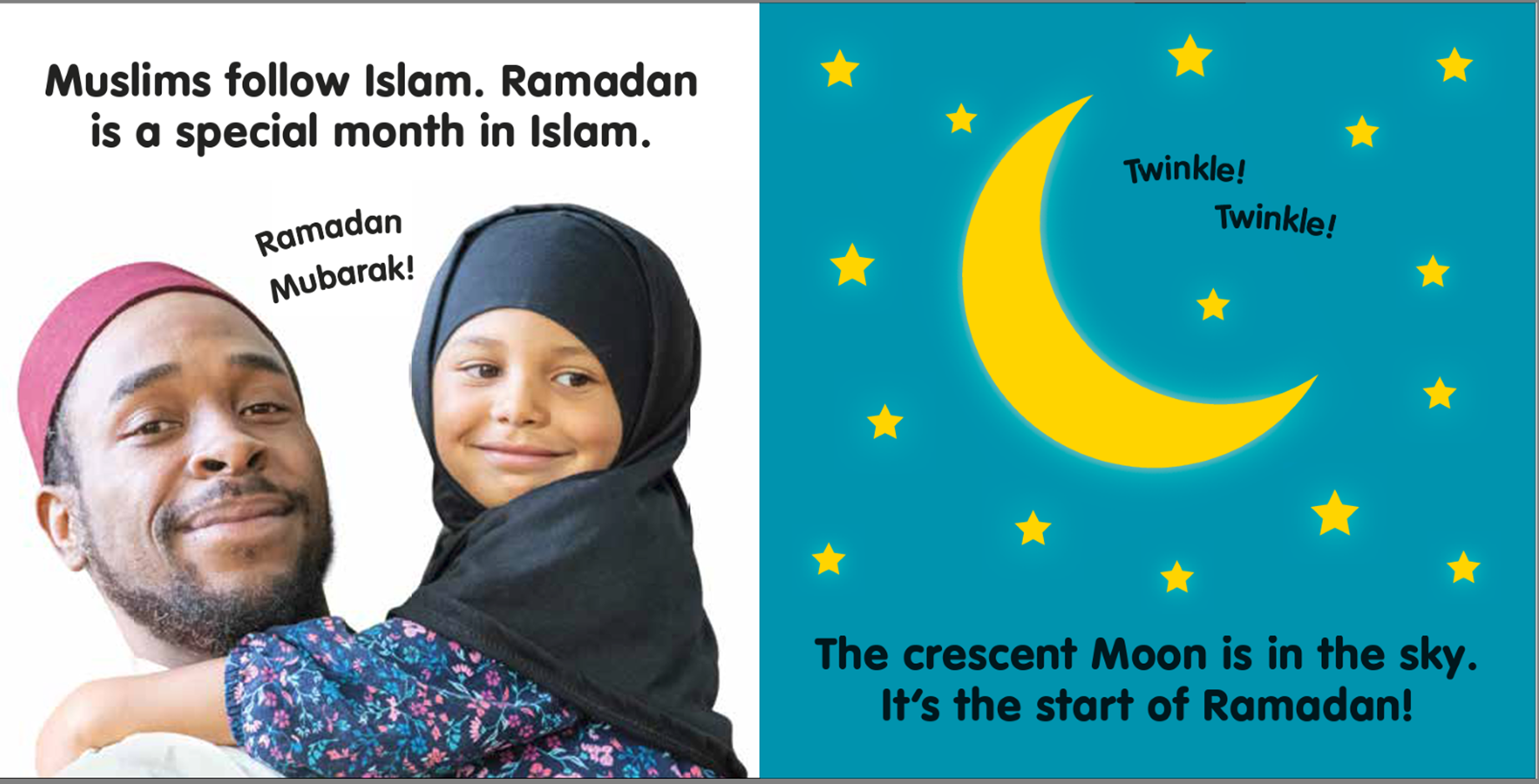 The book starts out saying Muslims follow Islam and Ramadan is a special month in Islam.  It features a a man holding a little girl and both are people of color.  The opposite page is a cartoonish crescent moon saying it is the start of Ramadan.

The next page has a plate of realistic deviled eggs on a bright background stating that many Muslims fast, don’t eat from sunrise to sunset.  It also states that the meal before dawn is called suhoor or sehri.  I’m not sure why Urdu is included with the traditional Arabic and no other languages are mentioned.

The next page then shows a little girl praying and switches to present tense first person and says “Let’s pray…” followed by a little boy reading Quran and stating that reading Quran helps us learn about Islam.  It then switches back to declarative 3rd person saying that people break their fasts before sunset prayers and shows a bowl of dates. 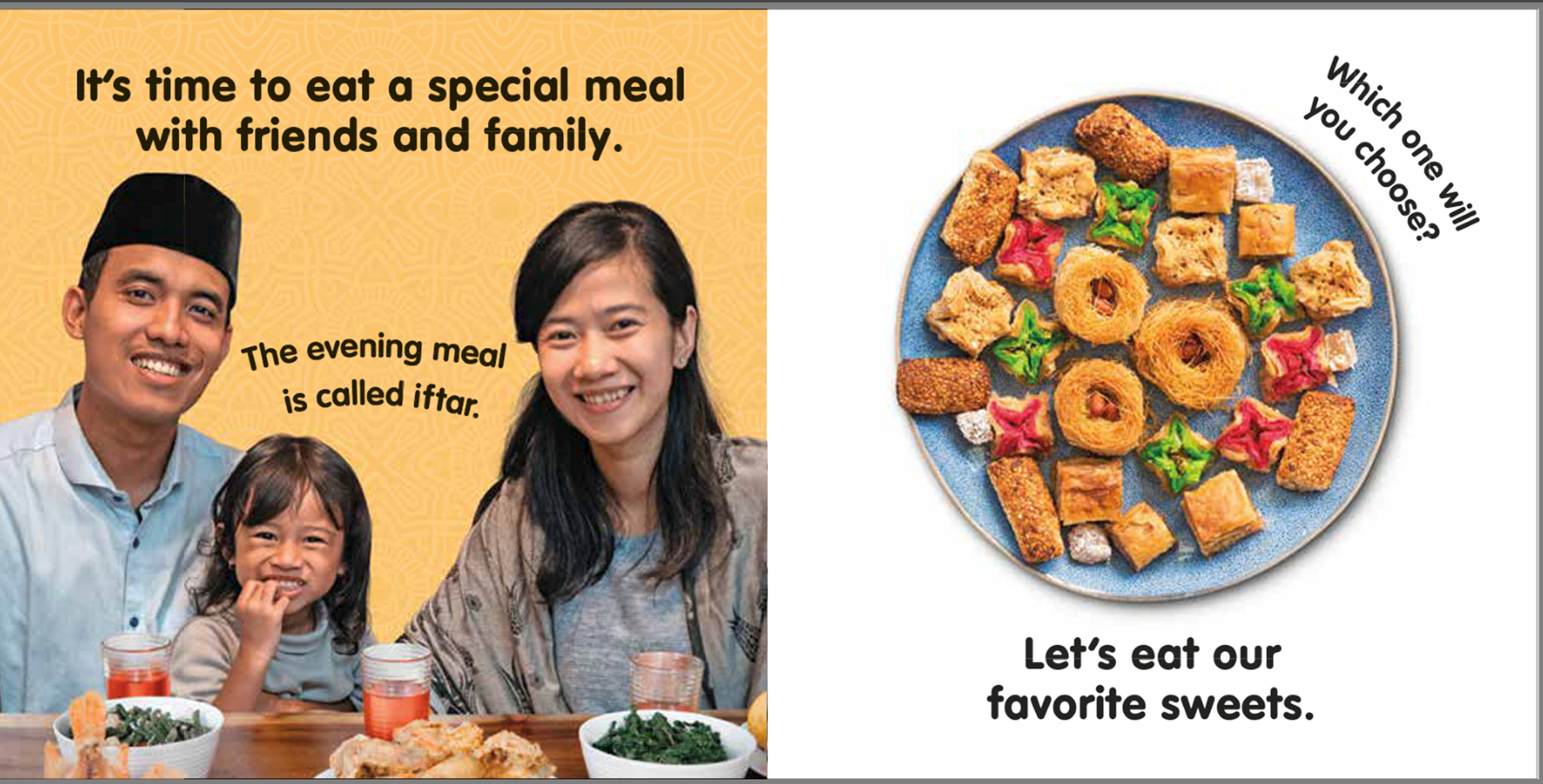 A family is then shown breaking their fast with a meal known as iftar and the reader is urged to pick their favorite sweet to eat from a plate of different shaped baklava.  There is no description about the baklava and I don’t know how enticing they would be if you have never tasted it before.

The book concludes with the same cartoonish night sky and silhouetted masjids saying the crescent has been seen, Ramadan is over and tomorrow is Eid.  The last page is a girls hand saying , “Let’s celebrate Eid by making henna patterns on our hands.” 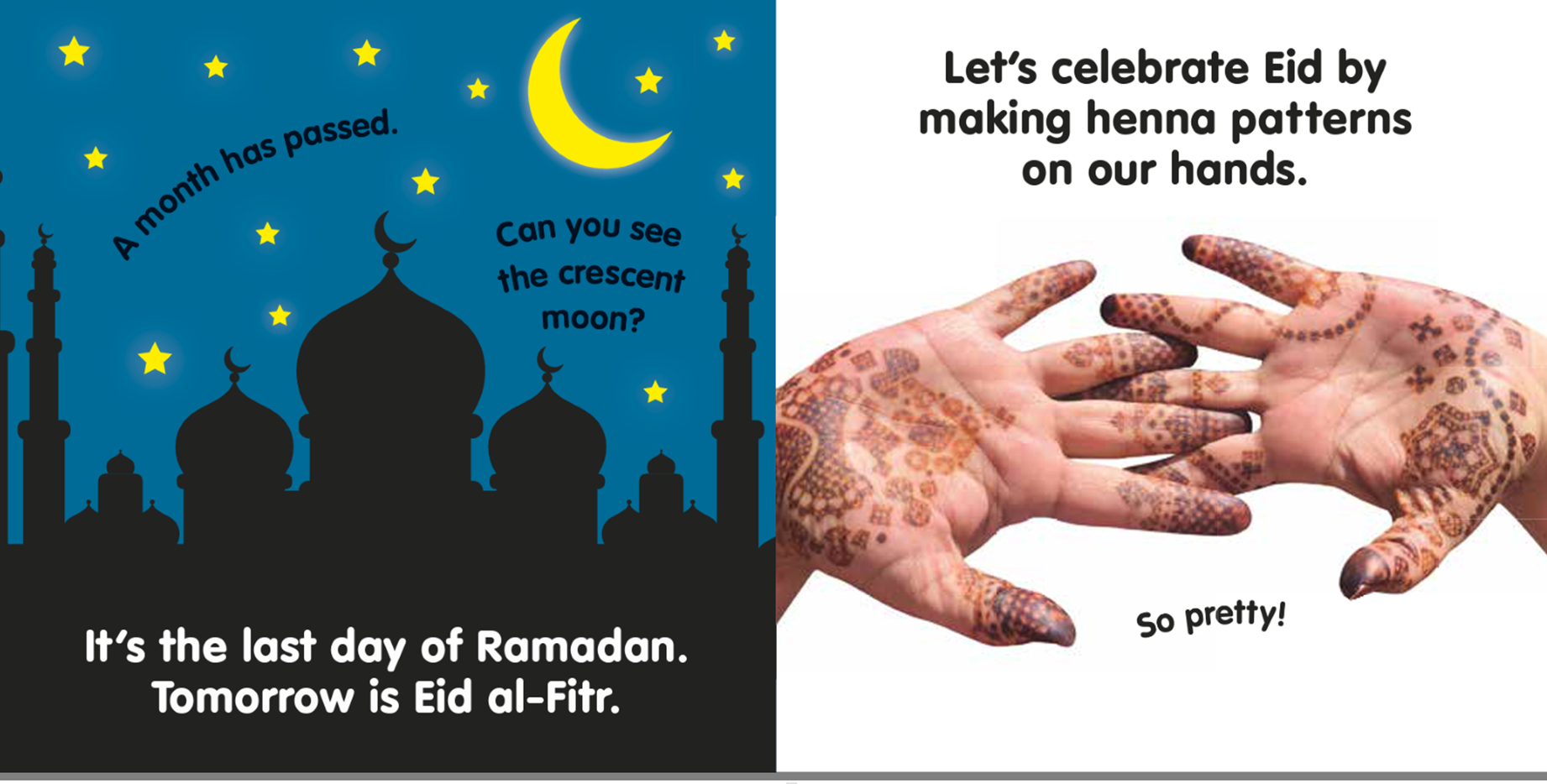 I think the idea is good, but I feel like it doesn’t answer many questions about Ramadan and Muslims and probably makes the religion and celebrations seem foreign and odd, presumably the opposite effect.  I admittedly haven’t read the other holiday books in the series and am not a baby expert, so perhaps I’m really critical and missing the developmental reasoning behind the presentation.  But I don’t know that this book is fun or really informative for any age, it just seems random.